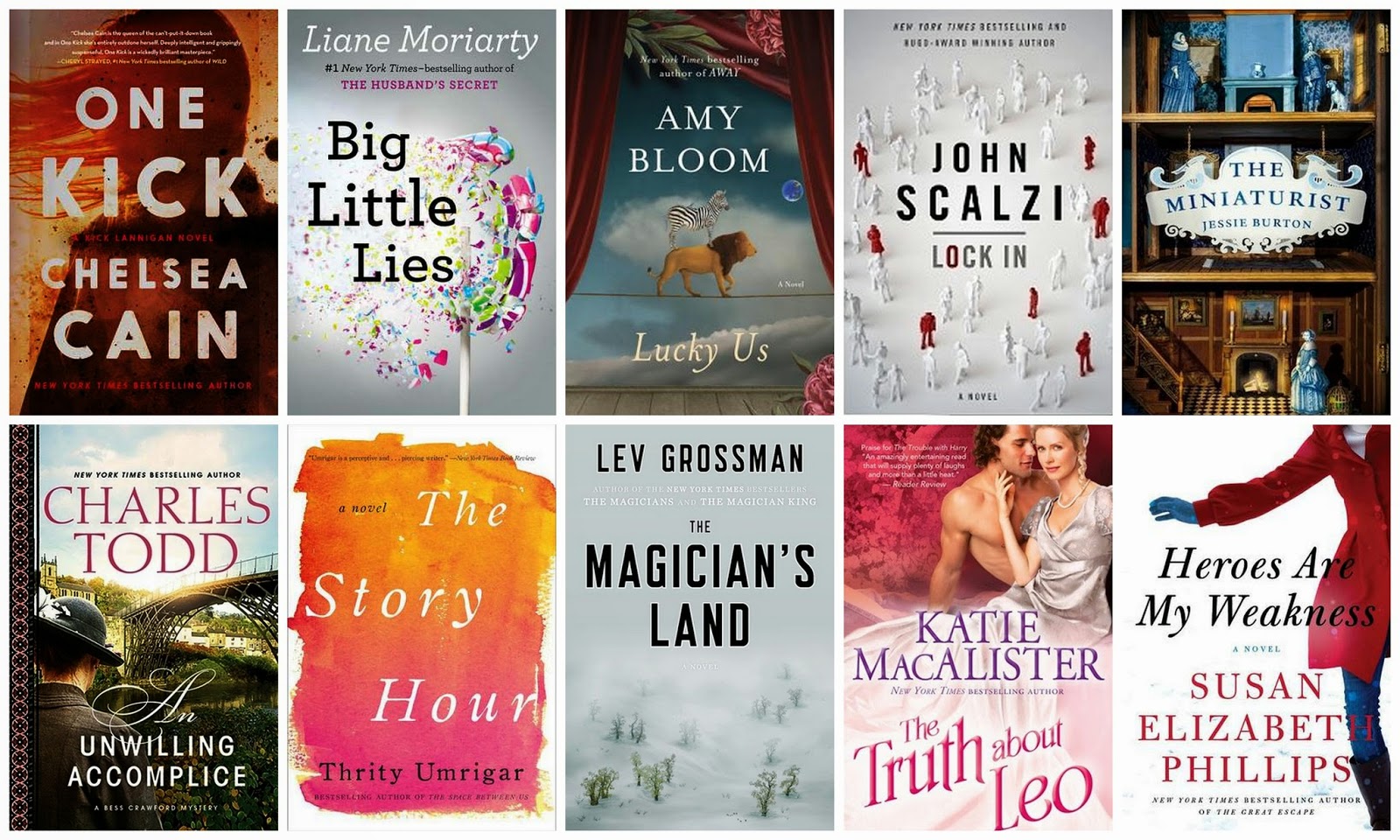 Kick Lannigan, 21, is a survivor. Abducted at age six in broad daylight, the police, the public, perhaps even her family assumed the worst had occurred. And then Kathleen Lannigan was found, alive, six years later. In the early months following her freedom, as Kick struggled with PTSD, her parents put her through a litany of therapies, but nothing helped until the detective who rescued her suggested Kick learn to fight. Before she was thirteen, Kick learned marksmanship, martial arts, boxing, archery, and knife throwing. She excelled at every one, vowing she would never be victimized again. But when two children in the Portland area go missing in the same month, Kick goes into a tailspin. Then an enigmatic man Bishop approaches her with a proposition: he is convinced Kick's experiences and expertise can be used to help rescue the abductees. Little does Kick know the case will lead directly into her terrifying past. (First in series.)

Disappointed by their families, Iris, the hopeful star, and Eva, the sidekick, journey across 1940s America in search of fame and fortune. Iris's ambitions take them from small-town Ohio to an unexpected and sensuous Hollywood, across the America of Reinvention in a stolen station wagon, to the jazz clubs and golden mansions of Long Island.

Heroes are My Weakness by Susan Elizabeth Phillips
Published: August 26, 2014

He's a reclusive writer whose imagination creates chilling horror novels. She's a down-on-her-luck actress reduced to staging kids' puppet shows. He knows a dozen ways to kill his characters with his bare hands. She knows a dozen ways to kill an audience with laughs. But she's not laughing now. Annie Hewitt has arrived on Peregrine Island in the middle of a snowstorm and at the end of her resources. She's broke, dispirited, but not quite ready to give up. Her red suitcases hold the puppets she uses to make her living: sensible Dilly, spunky Scamp, and Leo, the baddest of bad guys. Her puppets, the romantic novels she loves, and a little bit of courage are all she has left. Annie couldn't be more ill prepared for what she finds when she reaches Moonraker Cottage or for the man who dwells in Harp House, the mysterious mansion that hovers above the cottage. When she was a teenager, he betrayed her in a way she can never forget or forgive. Now they're trapped together on a frozen island along with a lonely widow, a mute little girl, and townspeople who don't know how to mind their own business. Is he the villain she remembers, or has he changed? Her head says no. Her heart says yes.

Fifteen years from now, a new virus sweeps the globe. 95% of those afflicted experience nothing worse than fever and headaches. Four percent suffer acute meningitis, creating the largest medical crisis in history. And one percent find themselves “locked in”—fully awake and aware, but unable to move or respond to stimulus. One per cent doesn't seem like a lot. But in the United States, that's 1.7 million people “locked in”...including the President's wife and daughter. Spurred by grief and the sheer magnitude of the suffering, America undertakes a massive scientific initiative. Nothing can restore the ability to control their own bodies to the locked in. But then two new technologies emerge. One is a virtual-reality environment, “The Agora,” in which the locked-in can interact with other humans, both locked-in and not. The other is the discovery that a few rare individuals have brains that are receptive to being controlled by others, meaning that from time to time, those who are locked in can “ride” these people and use their bodies as if they were their own. This skill is quickly regulated, licensed, bonded, and controlled. Nothing can go wrong. Certainly nobody would be tempted to misuse it, for murder, for political power, or worse.

On a brisk autumn day in 1686, eighteen-year-old Nella Oortman arrives in Amsterdam to begin a new life as the wife of illustrious merchant trader Johannes Brandt. But her new home, while splendorous, is not welcoming. Johannes is kind yet distant, always locked in his study or at his warehouse office -- leaving Nella alone with his sister, the sharp-tongued and forbidding Marin. But Nella's world changes when Johannes presents her with an extraordinary wedding gift: a cabinet-sized replica of their home. To furnish her gift, Nella engages the services of a miniaturist -- an elusive and enigmatic artist whose tiny creations mirror their real-life counterparts in eerie and unexpected ways. Johannes' gift helps Nella to pierce the closed world of the Brandt household. But as she uncovers its unusual secrets, she begins to understand-and fear-the escalating dangers that await them all.

Pirriwee Public’s annual school Trivia Night has ended in a shocking riot. One parent is dead. The school principal is horrified. As police investigate what appears to have been a tragic accident, signs begin to indicate that this devastating death might have been cold-blooded murder.

The Truth about Leo by Katie MacAlister
Published: August 5, 2014

Dagmar Marie Sophie is a poverty-stricken Danish princess whose annoying royal cousin is about to have her stuffed away in a convent. When she finds a wounded man unconscious in her garden, she sees a way out of her desperate situation. Leopold Ernst George Mortimer, seventh earl of March, and spy in the service of the king, finds himself on the wrong end of a saber and left for dead. He wakes up not remembering what happened...in the care of a beautiful woman who says she is his wife. Back in London, Leo-with the help of his old friends the eccentric Britton family-sets out to unravel what he's forgotten... Is Dagmar truly the wonderful, irrepressible woman who makes his heart sing, or is she a dangerous enigma bent on his destruction?

Home on leave, Bess Crawford is asked to accompany a wounded soldier confined to a wheelchair to Buckingham Palace, where he’s to be decorated by the King. The next morning when Bess goes to collect Wilkins, he has vanished. Both the Army and the nursing service hold Bess negligent for losing the war hero, and there will be an inquiry. Then comes disturbing word from the Shropshire police, complicating the already difficult situation: Wilkins has been spotted, and he’s killed a man. If Bess is to save her own reputation, she must find Wilkins and uncover the truth. (Sixth in series.)

Quentin Coldwater has been cast out of Fillory, the secret magical land of his childhood dreams. With nothing left to lose he returns to where his story be­gan, the Brakebills Preparatory College of Magic. But he can’t hide from his past, and it’s not long before it comes looking for him. Along with Plum, a brilliant young undergraduate with a dark secret of her own, Quentin sets out on a crooked path through a magical demi­monde of gray magic and desperate characters. But all roads lead back to Fillory, and his new life takes him to old haunts, like Antarctica, and to buried secrets and old friends he thought were lost for­ever. He uncovers the key to a sorcery masterwork, a spell that could create magical utopia, a new Fillory -- but casting it will set in motion a chain of events that will bring Earth and Fillory crashing together. To save them he will have to risk sacrificing everything. (Third in series.)

An experienced psychologist, Maggie carefully maintains emotional distance from her patients. But when she meets a young Indian woman who tried to kill herself, her professional detachment disintegrates. Cut off from her family in India, Lakshmi is desperately lonely and trapped in a loveless marriage to a domineering man who limits her world to their small restaurant and grocery store. Moved by her plight, Maggie treats Lakshmi in her home office for free, quickly realizing that the despondent woman doesn't need a shrink; she needs a friend. Determined to empower Lakshmi as a woman who feels valued in her own right, Maggie abandons protocol, and soon doctor and patient have become close friends. But while their relationship is deeply affectionate, it is also warped by conflicting expectations. When Maggie and Lakshmi open up and share long-buried secrets, the revelations will jeopardize their close bond, shake their faith in each other, and force them to confront painful choices.

If you'd like more book recommendations, browse our Books page or check out the previous LibraryReads lists.