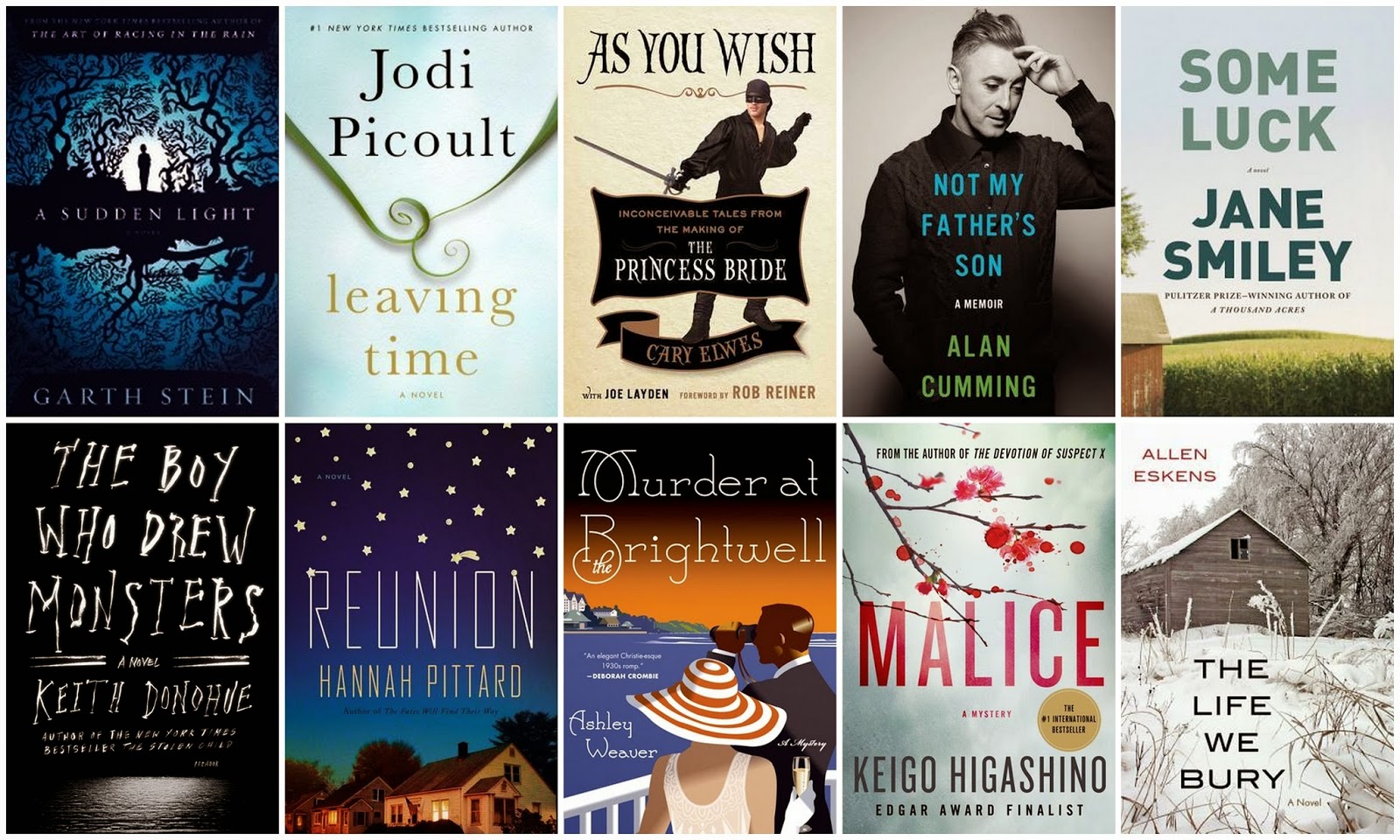 A Sudden Light: A Novel by Garth Stein
Published: September 30, 2014

In the summer of 1990, fourteen-year-old Trevor Riddell gets his first glimpse of Riddell House. Built from the spoils of a massive timber fortune, the legendary family mansion is constructed of giant, whole trees, and is set on a huge estate overlooking Puget Sound. Trevor’s bankrupt parents have begun a trial separation, and his father, Jones Riddell, has brought Trevor to Riddell House with a goal: to join forces with his sister, Serena, dispatch Grandpa Samuel—who is flickering in and out of dementia—to a graduated living facility, sell off the house and property for development into “tract housing for millionaires,” divide up the profits, and live happily ever after. But Trevor soon discovers there’s someone else living in Riddell House: a ghost with an agenda of his own.

Alice Metcalf was a devoted mother, loving wife, and accomplished scientist who studied grief among elephants. Yet it's been a decade since she disappeared under mysterious circumstances, leaving behind her small daughter, husband, and the animals to which she devoted her life. All signs point to abandonment . . . or worse. Still Jenna--now thirteen years old and truly orphaned by a father maddened by grief--steadfastly refuses to believe in her mother's desertion. So she decides to approach the two people who might still be able to help her find Alice: a disgraced psychic named Serenity Jones, and Virgil Stanhope, the cynical detective who first investigated her mother's disappearance and the death of one of her mother's co-workers. Together these three lonely souls will discover truths destined to forever change their lives.

As You Wish: Inconceivable Tales from the Making of The Princess Brideby Cary Elwes with Joe Layden; Foreword by Rob Reiner
Published: October 14, 2014

In a twenty-fifth anniversary, behind-the-scenes account of the making of the cult classic film, the lead actor shares never-before-told stories and exclusive photographs as well as interviews with fellow actors and producers of the film.

The acclaimed actor profiles his turbulent relationship with his father and discusses his 2010 appearance in a celebrity genealogy show to solve the disappearance of a WWII hero grandparent and his discovery of astounding family secrets.

On their farm in Denby, Iowa, Rosanna and Walter Langdon abide by time-honored values that they pass on to their five wildly different yet equally remarkable children: Frank, the brilliant, stubborn first-born; Joe, whose love of animals makes him the natural heir to his family's land; Lillian, an angelic child who enters a fairy-tale marriage with a man only she will fully know; Henry, the bookworm who's not afraid to be different; and Claire, who earns the highest place in her father's heart. Moving from post-World War I America through the early 1950s, Some Luck gives us an intimate look at this family's triumphs and tragedies, zooming in on the realities of farm life, while casting-as the children grow up and scatter to New York, California, and everywhere in between-a panoramic eye on the monumental changes that marked the first half of the twentieth century.

Ever since he nearly drowned in the ocean three years earlier, ten-year-old Jack Peter Keenan has been deathly afraid to venture outdoors. Refusing to leave his home in a small coastal town in Maine, Jack Peter spends his time drawing monsters. When those drawings take on a life of their own, no one is safe from the terror they inspire. His mother, Holly, begins to hear strange sounds in the night coming from the ocean, and she seeks answers from the local Catholic priest and his Japanese housekeeper, who fill her head with stories of shipwrecks and ghosts. His father, Tim, wanders the beach, frantically searching for a strange apparition running wild in the dunes. And the boy’s only friend, Nick, becomes helplessly entangled in the eerie power of the drawings. While those around Jack Peter are haunted by what they think they see, only he knows the truth behind the frightful occurrences as the outside world encroaches upon them all.

College student Joe Talbert has the modest goal of completing a writing assignment for an English class. His task is to interview a stranger and write a brief biography of the person. With deadlines looming, Joe heads to a nearby nursing home to find a willing subject. There he meets Carl Iverson, and soon nothing in Joe's life is ever the same. Iverson is a dying Vietnam veteran--and a convicted murderer. With only a few months to live, he has been medically paroled to a nursing home, after spending thirty years in prison for the crimes of rape and murder. As Joe writes about Carl's life, especially Carl's valor in Vietnam, he cannot reconcile the heroism of the soldier with the despicable acts of the convict.

Five minutes before her flight is set to take off, Kate Pulaski, failed screenwriter and newly-failed wife, learns that her estranged father killed himself. More shocked than saddened by the news, she reluctantly gives in to her older siblings' request that she join them--and her many half-siblings, and most of her father's five former wives--in Atlanta, their birthplace, for a final farewell.

Acclaimed bestselling novelist Kunihiko Hidaka is found brutally murdered in his home on the night before he’s planning to leave Japan and relocate to Vancouver. His body is found in his office, a locked room, within his locked house, by his wife and his best friend, both of whom have rock solid alibis. Or so it seems. At the crime scene, Police Detective Kyochiro Kaga recognizes Hidaka’s best friend, Osamu Nonoguchi. Years ago when they were both teachers, they were colleagues at the same public school. Kaga went on to join the police force while Nonoguchi eventually left to become a full-time writer, though with not nearly the success of his friend Hidaka. As Kaga investigates, he eventually uncovers evidence that indicates that the two writers’ relationship was very different that they claimed, that they were anything but best friends. But the question before Kaga isn't necessarily who, or how, but why.

Murder at the Brightwell: A Mysteryby Ashley Weaver
Published: October 14, 2014

Amory Ames is a wealthy young woman who regrets her marriage to her notoriously charming playboy husband, Milo. Looking for a change, she accepts a request for help from her former fiancé, Gil Trent, not knowing that she’ll soon become embroiled in a murder investigation that will test not only her friendship with Gil, but will upset the status quo with her husband.

If you'd like more book recommendations, browse our Book Lists page or check out the previous LibraryReads lists.