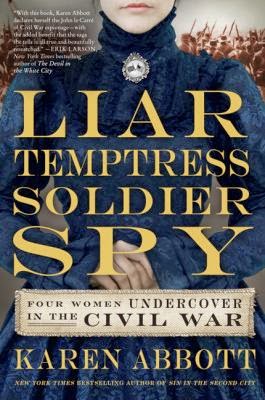 A young Northern woman cuts her hair and dons a Union uniform. A seventeen-year old Southern woman aims a pistol at the Union soldier who breaks into her house. A notorious Confederate spy struggles to maintain her operations under scrutiny and in prison. And a Union sympathizer in Virginia begins operating an espionage ring out of her home.

Liar Temptress Soldier Spy tells the stories of these four historical figures, real women who defied the conventions of their time to join the fight for their countries during the Civil War. All of them went undercover at some point during the war, carrying intelligence that affected the outcome of numerous military operations. This fascinating historical account reads like fiction, alternating the stories of the four women with cliffhanger chapter breaks, and speculating on the thoughts and emotions that bring them to life. - Michelle (Sunset)